Trading In Danger by Elizabeth Moon 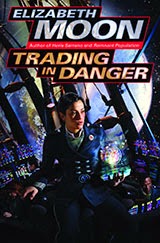 This is a nice far future space ship based science fiction story by Elizabeth Moon. She has several series out, some pretty lengthy, this is one of the less popular series but still very strong. This is book one. It follows a young scion of a trading guild on her first voyages as a starship captain. It has a bit of military edge to it and isn't too heavy on the hard side of science fiction, which makes it my favorite type of science fiction story.

There are a few confusing passages using trade jargon that might confuse you, but it adds to the story by showing just how much the main character knows about trade ships and so helps add a bit of depth to the character.

So far there are half a dozen novels in this series. I plan on reading them all.
Posted by Joseph at 9:25 AM