Whole. E. Crapola. Did you all see this? You didn't? Why not? Go watch it!

I know it seems like I just gush about things a bit too much here but it's hard not to. There are so many great shows, movies and books out there. This show is one of the best and the extra long season 5 finale is easily one of the top 3 episodes they've made. I think the first episode of this season was fan freaking tastic, and the barn scene from season 2. And any scene with either of the Dixon brothers is going to be top notch. Or any scene with Carol. Yeah...

So I could go on and on and spoil this episode for you but I won't. I'm just going to give it my high recommend. It's a must watch for anyone that's been following the series, and the series itself is essential viewing for all creature feature fans. I think the only type of person that wouldn't get a kick out of this show are people that are sensitive to gore. It's a zombi show. The gore is over the top.

I kinda feel like I don't even need to recommend this show to anyone. If you are even remotely interested in this genre and medium you are already watching.

I'll end with this: My favorite character is GI Joe. His rousing speech about "fine grains of s**t" was spectacular. Yeah yeah, I know that's not his real name but you know exactly who I'm talking about.
Posted by Joseph at 1:37 PM No comments:

For those that haven't been around my little corner of the web before, I only review and talk about things here I really like. Keeping it positive, that's our motto here. That's not hard to do when you have awesome scifi like this to read.

If you know me well you'll know that I'm a sucker for space ships. My collection of little ships numbers in the 100's. I set up epic battles in the living room with dinner plates and earth globes as terrain. Throw some dice. Pew pew. For those that have the same inclination this really is the book for them, but there's a lot more than space battles here.

This book has mystery, hard boiled detectives, inspirational freedom fighters, horror and a comic relief mechanic who kinda sounds like Paulie Shore ("Quit harshing my buzz."). It's great, with so many elements you'd think the book might get weighed down, but the authors here did awesome.

It only comes in trade paperback and the ebook costs as much as the trade. No mass market paperback or ebook discount. Does that sound like a complaint? It's not! Trade paper is my favorite medium for reading. So for me it's no problemo.

This is the first book in what is working up to be a lengthy series, the Scifi channel is making a TV show out of it as well. The Expanse is the name of the show and series.

I recommend this book for anyone looking to dig into a new space opera, for any fans of Firefly and for spaceship lovers in general. 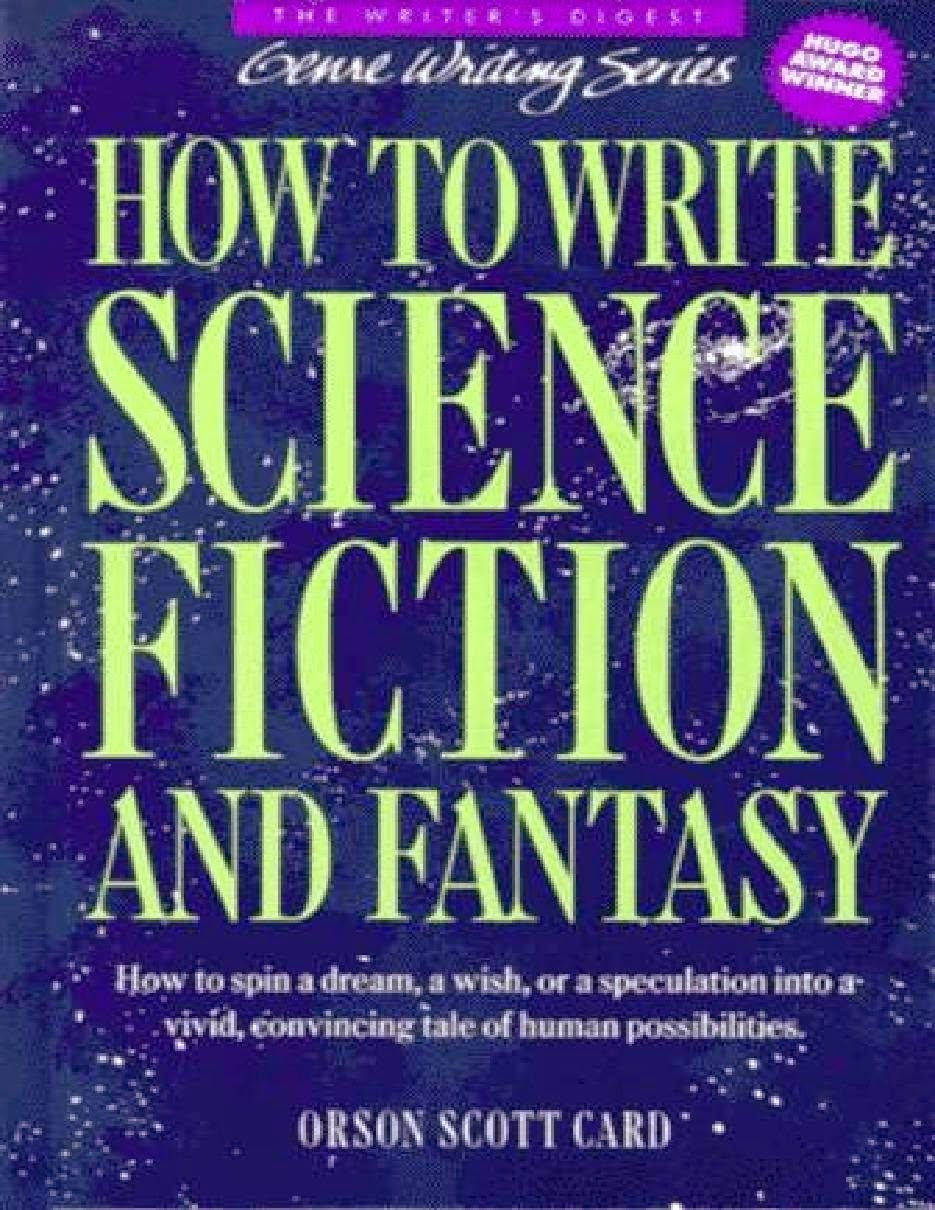 In one of his books on writing, How to Write Science Fiction and Fantasy, Orson Scott Card talked about genre. What is fantasy and what is science fiction. People like to yammer back and forth about it. I like Orson Scott Card's take. Scifi has rivets, that's the gist of it.

Then he goes on to talk about how Science Fiction deals with the possible, though perhaps improbable.

Card goes into a scenario where the readers of different genres read the sentence, "He walked into the room mechanically."

A reader of the literary genre might be shocked and appalled to learn that person walked in with mechanical legs, and not that he was just walking in a stiff manner. The scifi reader would be disappointed if the person was not, in fact, a cyborg.

I take that as a lesson, some people aren't going to get your work. You want the target audience to get it though, so I guess that's the goal.

If you get a chance, pick up Card's books on writing. I don't know how good he is at teaching people to write but his books are good fun, informative.
Posted by Joseph at 5:06 AM No comments:

Back to Writing. About Time!

I hit a funky health road block over the last couple of months but am now back to writing like a fiend. I'm putting together the sequel to my first novel. It's all written in my head I just need to get my little fingers going! It's about superheroes. The first is called Ms. Marathon: Earth's First Superhero. The sequel is Ms. Marathon #2: Bay City Defenders.

Sounds pretty cheese ball? You have no idea. One of the main characters is a talking submarine named after General Patton, nickname of 'Patty'.

When I get the series done I'll release it in all formats. I want to have it finished first and release all at once. I dunno about you but I HATE waiting forever for a series to end. This one will only be 2 books long so that's easy peasy.

After that I have a fantasy novel, about half done, that looks to be turning into a real girl power story even though I try to avoid those kinds of politics.

Yeah, so full steam ahead.

Go check out Dean Wesley Smith's website if you want to see a guy who really knows how to stick to it and keep grinding. He's on a little break now, but getting back to it after a break is pretty hard. Watch him come out swinging in the next week or so. He'll leave you feeling lazy, for sure.

http://www.deanwesleysmith.com/
Posted by Joseph at 8:13 AM No comments:

Well that might be so, but let me go over some of the benefits with you.

1. No internet distraction: This is crucial. I'm not tempted to check my facts on wikipedia, facebook, The Passive Voice, Dean Wesley Smith's site, etc...Think about how much time you waste dinking about on the webs. How often you break concentration to check email real quick. When I was in law school I was one of the few people to take all my notes by hand, computers are just too distracting. You get much more out of a lecture, you are much more engaged, less scattered, when writing by hand.

2. Creative engagement: Not everyone is like this but I'm more creative with pen and paper. I can draw and diagram things very easy and the act of writing engages the drawing parts of the brain. It's hard to describe. Just try it, it feels different. When I used to design boardgames and videogames (I still design boardgames) I would ALWAYS start with pen and paper. It's a far more visual medium so using a pen for drawing and such makes more sense there, sure, but I find myself drawing characters and maps and spaceships and what not when I'm writing. When I was typing before I'd have to stop to draw things, or fire up MS Paint and try to draw that way.

3. You can draw stuff: I've mentioned this above, but let's reiterate. You can draw things, sketch it out. That map at the front of Lord of the Rings, you can draw that for your own stories. This is a big plus for visual people but can help out everyone. If you are writing a Star Trek book wouldn't it be nice to have a sweet sketch of the bridge in there somewhere to help you draft the action. Yep.

4. Power forward...shut up editor voice!: If you've been writing for a bit you know that your internal editor is a relentless heckler. You can't shut him down completely but when handwriting you can't really go back and rejigger every other sentence. It feels more 'right' to just power through and fix it in post. When you are typing it into the computer THAT is when you can catch all of the misspellings and grammar stuff and typos, maybe fix the odd or awkward sentence here and there. Just this aspect of handwriting makes me more productive.

5. You aren't staring at a screen all freakin' day: You work on a screen, you play video games on a screen, you watch TV and movies and hell you might even read books on a screen. So many screen hours, doesn't it get annoying? Unplug man! It feels great.

Some might say that typing is so much faster, but it's not. Not for writing. Even a fast writer is only putting down about 20 words a minute. That's 1200 an hour. You can do that pretty easily handwriting. It is more physically demanding to hand write though, so there's that. And without the distraction inherent to a computer, without the redoing every other sentence, you end up going faster. Transcribing does take some time though, so there is that, but I use that time to edit myself. So the typed version is my 2nd or beta draft (my final draft before error checking).

I might get back to the computer to draft at some point, carpel tunnel will probably force me. Hopefully by then I'll have trained myself to stay off the webs and to quit going back over everything all the time. We'll see. For now I'm handwriting. You might try it and see how you do.

But what do I know, I only have one full length novel finished and I did that all on computer. My current work is going much more smoothly though, after being stuck for awhile writing to screen.

End Note: This applies to DRAFTING. As in the first draft of a long piece. For editing and fixing and what not a computer is awesome.

Posted by Joseph at 2:38 PM No comments:

About half of what I read are comics, I read at least one trade a week. This one is the best I've read this year. It starts off with a young Cyclops being miffed about how crappy his adult self has turned out, so he reconnects with his father, Corsair, and they go off a swash buckling together.

The strength of this story is in the father-son relationship between Corsair and Cyclops. Of course it's a space opera adventure, but the powerful parts are the quiet moments where a boy is learning from his dad, trying to impress him.

I recommend this one to any comic book fan, it has a very broad appeal. Know that it's not a huge epic cross over story, like Civil War or Infinity Gauntlet, but rather it's a smaller tale of father and son. Low key.
Posted by Joseph at 4:21 PM 1 comment:

Can't gush about this movie enough. I thought I wasn't going to be into it since I have been a jazz drummer, a pretty good one too. But this movie more than pulled it off. Even if you are a jazz drummer Miles Teller did well enough 'faking' it that you were never pulled out of the narrative.

The story itself is a timeless one, old mean dog riding the young pup hard enough that he either fails or sails.

The actors in this film were nominated for all kinds of awards and they earned each and every nomination. Just a really great performance from all the players.

I give this film a high recommend for any movie fan and it's a must see for music lovers and the beer sniffing snobby types who get excited for 'important' films.
Posted by Joseph at 2:53 PM No comments: