Has anyone read anything mind blowing, maybe something just 'good'?

I'm in a bit of a dry spell. The last 2 novels I've read have not been my cup of tea.

Leave some recommends in the comments if you'd like.
Posted by Joseph at 8:54 PM 6 comments:


Today we'll do a bit of a throw back review. I have been watching the summer blockbusters but haven't seen anything this week to really blow my skirt up, in the summer I'll tend to review more movies than books, but we'll try to squeeze more books in.

This is the cover of the edition of Almuric that I first owned. I have two of these editions plus a later one. Yes, I've bought this book 3 times in paper and once as an ebook. I like it that much.

The reason I like it so much is likely a bit of nostalgia. I had started reading science fantasy in 4th grade with The Hobbit. Can you think of a better starting point? My 5th grade year was more science fiction than fantasy, I read all the Robotech books my dad and I could find. He'd read them first because he was fast, and I'd get them second. We actually found the final book in the series next to the check out stand at our local gas station. Back when books were sold as impulse buys next to the bubble gum.

I swear if I ever run a gas station there will be a stand with old paperbacks near the register.

But I'm getting distracted, where was I? Oh yeah, nostalgia. I read Almuric in 6th grade as I was kicking off my life long love affair with everything written by Robert E. Howard. It's a great example of his work, it has magic and monsters and everything you want in a good sword and sorcery novel. It's also tightly written, meaning it's a short novel without any filler.

Lack of filler can be a rarity in fantasy where epic worlds are being created. Some have said a short fantasy can be disappointing. I don't know if I agree but with the Sword and Sorcery subgenre a brisk pace, shorter length and lots of action are the order of the day.

For those that might not be up on the lingo, Sword and Sorcery tends to be fantasy but with a lot of grit and testosterone. Think Conan as the quintessential Sword and Sorcery character. Low magic and grim worlds are common. It involves plenty of sex and shirtless men stabbing their swords into things. Heh...

I think my favorite part of Almuric is where the main character joins the tribe after a wrestling match. Sweet.

I recommend this book for people that like fun yarns. It's not written perfectly, there are some awkward parts, and it's kind of a rip off of John Carter, but most people don't know John Carter anyway. So give this one a go, and if you like it, give E. Howard's other characters a go. Start with Conan, Kull and Bran Mak Morn.
Posted by Joseph at 5:41 PM No comments:

One of these pics is of me...the other is not. 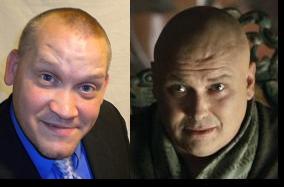 Here is a link to Genocide Man, an awesome web comic by Remus Shepherd.

I've never been that into web comics, none have sparked my interest up to this point. Genocide Man, however, is really good. I'm only through a couple of chapters right now but the story is great, the art is perfect for the story being told and the world building is fantastic.

It's a perfect read for scifi fans, fans of web comics and especially fans of post apocalyptic settings. It's no clearly post apocalypse, it's more of a slow downfall.

Very cool.
Posted by Joseph at 6:45 PM No comments:

It's been awhile since I've seen or read something worth raving over, but last night I watched the movie Zombeavers. Holy cow what fun.

Zombeavers is a solid entry into this genre. It has the splatter effects, nudity, stupid fun and humor that a good B-grade flick needs.

I recommend it to anyone who is into monster movies and assorted schlock. It has lots of boobs and sex and violence so maybe your 5 year old wouldn't handle it very well. The easily offended folks who are too cool for this sort of thing should also steer clear.