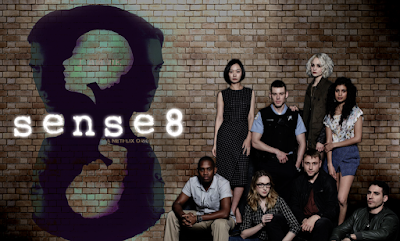 What a great series. A new Netflix Original about a bunch of people psychically linked. It's made by the same people that did The Matrix, so you know it's a mind bender.

I give it a high recommend to people interested in a nice modern fantasy type show but I have to warn you, if you can't handle seeing sex and people unlike yourself then you won't like this show. No matter who you are, no matter what your experience, there are main characters in the show you won't relate with.

Let it be clear: There's tons of gay stuff. If you aren't familiar with gay cinema you might be a bit taken aback or straight offended.

There's your American hero cop dude, a Russian thief guy, an Indian lady getting an arranged marriage, a waif-fu Korean chick, a transgender person with a shitty family, drug addicts, lesbians, gay dudes, black dudes in Africa and on and on and on. If you have trouble seeing any of those people and accepting them as normal then you will probably feel shocked and bludgeoned.

For the rest of us this is a great series. I've not seen the final episode yet, but I am marathoning the series right now.

This from a friend: "Trigger Warning: This Ain't Little House on the Prairie" Ha!
Posted by Joseph at 4:54 AM