So this weekend there was a title match between Charlotte Flair and Becky Lynch. It was one for the ages, I loved every minute.

Yes, I know, wrestling is dumb. Usually. But once in awhile, a few times a year, it's great. And Becky Lynch versus Charlotte Flair was soooo great. This is what people live for, story telling and investment that has you screaming at the screen.

Emotional connection. That's the key. It doesn't matter your genre or medium. Get the audience invested in the characters, and you're golden. How do you do that? I dunno. It's hard.

But I can show you how the WWE did it with Flair/Lynch. I'll tell the story and maybe we'll learn something.

For years, and up until recently, Becky Lynch and Charlotte Flair were besties. They came up through the roster together, trained together, had each other's back. An unbreakable duo. Over time, however, the relationship became strained. As Flair was winning titles, Lynch played second fiddle. Always the bridesmaid, never the bride.

Then, earlier this year, Flair was injured. Her boob popped. Seriously, that's not kayfabe or storyline. One of her breast implants was damaged in a match and was leaking. She had to get it fixed, so she was out for awhile. The top of the mountain was clear, the throne empty.

Into that gap stepped the bestie, the side kick, Becky Lynch, determined to make a go of it, stepping out from Flair's shadow. And goddamn did she kick ass, running through the roster like a buzzsaw, earning a title shot in mid summer. She was just one win away, an easy win too against a sub-par champion named Carmella.

So Lynch's dreams were about to come true. Champion. Finally. After years of toil.

Then Charlotte Flair came back from injury.

Immediately, ex-champ Charlotte Flair was given a title shot. They added her to the very same title match where Becky Lynch was favored to win the title against Carmella. It became a triple threat match. Three women in the ring. First to get a pin wins.

And, of course, Flair gets the pin and takes the title. The crowd booed. Everyone in the arena, everyone watching at home, was hoping Lynch would take it. She'd worked so hard, struggled for so long, to have the rug pulled out from under her now was gut wrenching.

When Charlotte Flair, with her newly won title in tow, went to shake her friend's hand in a show of friendship and good sportsmanship, it happened. What we'd all been waiting for. Becky Lynch snapped, beating the holy hell out of Flair, leaving her former friend broken in the middle of the ring with her title.

The crowd went nuts. I did too. Lynch was no longer content with second fiddle. She wanted her her title shot. Demanded it. One on one. No bullshit getting in the way.

This being wrestling, when a beef is set up like this it doesn't fester. It doesn't eat away for long, it gets settled. It gets settled in the ring. In this case, a last woman standing match at the all women's PPV, Evolution.

Now let me explain 'last woman standing'. It's basically a no hold's barred hardcore match. No pin falls, no count outs or submissions. The winner is the last one standing when the other can't get up. It's perfect to settle a feud.

A feud this well set up, taking years to grow, is a fine thing. It gets you invested in the match itself. Delivering a good show in the ring, however, is difficult. You have to match up the heat of the feud with the action in the ring. And this feud was so hot there's no real way you can do it justice with just any old scrap. It has to be epic, and violent.

And it was. The most violent women's match in history. They hit each other with kendo sticks, blasted each other through tables, whacked each other with chairs. They jumped off of ladders onto the announce table, and through it. They fought out into the crowd. At one point Flair had Lynch's legs bent up in a ladder. Flair moonsalted. Becky buried Flair under a huge pile of broken chairs and tables, only to have Flair come busting up out of them like a demon.

Finally, after more than 30 minutes of nonstop wall to wall insanity, Lynch power bombed Flair through a table for the win.

Lynch. Champ. Finally. I don't think my fat heart could have handled much more, it was that awesome.

So now what? Lynch is champ. She vanquished her friend. Is it over?

No. This is wrestling. It never ends. Don't think for a second Charlotte Flair is through, she'll be back. And Lynch will be waiting.
Posted by Joseph at 7:03 PM No comments:

Doctor Who - My First Time

I liked this season opener quite a bit but I'm not sure what all the fuss is about. It seemed like a perfectly serviceable scifi show but I know quite a few people who hold it in the highest regard. I liked it enough that I'll probably watch a few more episodes. Maybe it grows on you. I'm sure I missed a ton of calls backs and in jokes.

The thing about taking on a new show is that I have so many great things to read, plus tons of other shows, that it's hard for something new to get into my regular rotation.

I figured there'd be internet drama because, you know, first lady doctor and all of that, but you don't get a sense of that if you ignore the internet and just watch the show. Searching for the image to put above this post I, of course, saw lots of links to the various dramalamas. It's important to avoid the lamas, I think, if you really want to enjoy a show.
Posted by Joseph at 2:23 AM 1 comment:

The other thing I'm a fan of, besides Science Fiction and Fantasy (and story telling in general) is combat sports. I'll watch sumo, professional wrestling, boxing, just about anything. I think the stories and conflicts generated are great, the conclusions satisfying.

Last weekend though, these two morons fought. It's frustrating to me. They are great athletes, tough guys, all of that, but they are missing one of the things that makes martial arts different from two thugs duking it out. That thing is respect, maybe. Maybe it's a humble bearing. A certain maturity. I dunno if I have the words, but whatever it is these guys don't have it.

This was the biggest MMA/UFC fight of all time, by a long shot. They topped 2.4 million buys if I'm not mistaken, breaking the previous record of 1.6 million. The lead up included McGregor's gang attacking a bus Khabib was on, and the aftermath saw Khabib jumping into the crowd and starting a post fight brawl that basically turned into a melee. Irish fans and Russian fans brawled all over Las Vegas that night.

There will always be trash talk in a competitive environment, there's no problem with that. This is something different. Something disgusting. I don't like it. But with sales numbers like that you are going to see more of it.

I'll leave with a final question. Seeing as this is the most successful way to market fights, how much of this extra curricular brawling is hype? Simple marketing? I mean, if you are rewarded for acting like a thug, why not embrace it? In wrestling it's called 'kayfabe'. It means 'be fake'. It means to stay in character so the fans can never see behind the curtain and see just how fake everything really is.
Posted by Joseph at 9:34 PM No comments:

I'm a big fan of endings. When I watch a movie or read a book I can forgive some boring parts if it all builds up into a dynamite climax. You'll see this in my own writing. So when I watch television, especially endless serialized stories like The Walking Dead, I get left feeling empty after every episode.

Sometimes the show is so good the lack of a big ending doesn't bother me. Game of Thrones is this way. Other times a show is very episodic, meaning each episode is mostly self contained. Star Trek is that way, it's a weekly adventure that begins and ends on screen each episode. I think that's probably my favorite way to consume story in video format. The 1 hour self contained episode.

So what does this have to do with The Walking Dead? Well, the current season started up last week and I watched the first episode. It was well done, but I can't help but feel bored and frustrated when the episode ends. I want to KNOW what's going on, I want to KNOW where Negan is. I need the whole story and I need it now.

It seems over the years I'm getting more and more into the story closure, and more and more frustrated by the constant teasing out of bits for so long that when the pay off comes I've almost lost the thread of the narrative.

So I'll skip this season of The Walking Dead and watch it later all at once. Binge watch it. Or maybe not. There are so many great books, episodic shows and movies out there to enjoy there's no need to slog through countless hours of TV to find a good ending.

And when the final season of Game of Thrones comes out you'll see me saying the complete opposite. Ha!
Posted by Joseph at 11:01 PM No comments: 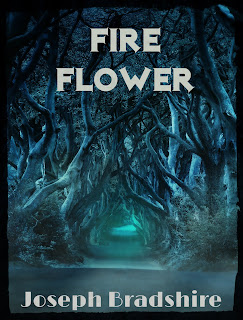 Hey positive people, my new short story Fire Flower is now for sale on Amazon. 99 cents, it's about 15 pages or so. A nice quick read.

It's an epic fantasy story, though it seems to me the term 'epic' doesn't make sense for a short story. It's about two ladies living in a dangerous part of the woods. How do they survive? Are they witches? Well some rough dudes come to find out.

If you like the story leave a review. That's the best thing you can do for an author I think, besides buying the story. :-)
Posted by Joseph at 7:44 PM No comments: